This week was Phoebe's graduation from Nursery.
I'll confess, I always thought these sorts of ceremonies were a bit unnecessary.
But we went along because it would be Phoebe's last chance to say goodbye to her friends, and the various and assorted nursery staff who have looked after her since she was 11 months old. 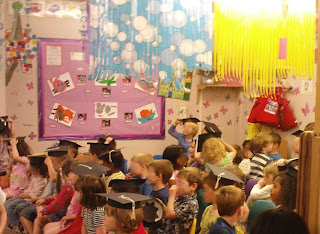 The people who I trusted to teach and entertain her, to care for her and control her, to feed her and change her nappy, to comfort her and cuddle her, and provide for all her needs for two mornings a week for three and a half years! And the children who have been her peers and whose social interaction has helped to shape the person she is now.

And suddenly, there was a lump in my throat.
Most of the children seemed caught up in the excitement of moving on to "big school".
This is N, Phoebe's best friend at Nursery, who is wise way beyond her years. She seemed to be the only child who realised what was being left behind, and burst into tears when it was her turn to collect her certificate. 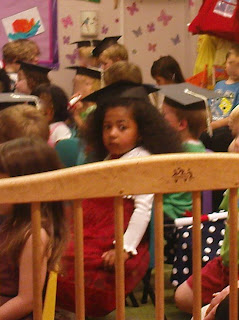 However, certificates were duly distributed. Photographs were taken. Sandwiches and juice were consumed. Parents chatted. Children ran amok. And all ended happily. 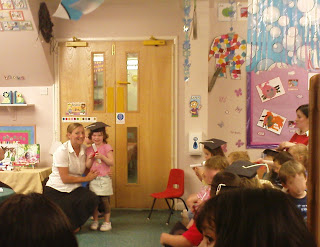 Recently we went to a Mamma Mia themed engagement party. Captain Black looked like this: 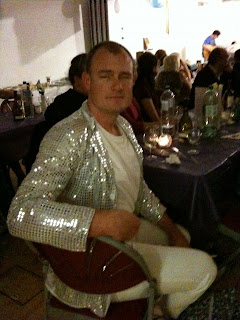 I looked something like this; except with silver platform boots and three months pregnant! 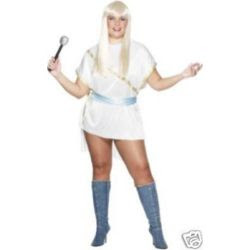 Anyway, we won a Mamma Mia soundtrack CD for our costumes.
When we got back into the car after Phoebe's graduation this(it's at the top on the left of the page) was what started playing:

That lump in the throat just gets bigger.